Well another month has disappeared and I’ve yet again been a slack old thing and missed doing the couple of blog posts that did flutter around in my head. Oh well, thank goodness Sherry over at Sherry’s Pickings keeps us motivated by hosting In My Kitchen where we can both share and have a sticky beak at whats going on in all the kitchens out there.

It was time to process some more pickled onions so I purchased a large bag of pickling onions that appeared Ok on the outside, but much to my chagrin as I started peeling them it was obvious the majority were rotten in the centre. I was left with about a quarter of the bag and started the brining process using the lovely little weight I brought home from Turkey to keep the onions immersed. After a day of soaking, these onions went into the compost too. I was thrilled (not), it really hurts preparing onions, even more so with no result to be had. The clay weight worked a tree though!

I can’t remember where I spotted this Disney cake to give credit, but I think it’s a ripper! My daughter didn’t accept the challenge to make it, wonder why?

My last post was about how we were going to have our garden open as part of the Baw Baw Sustainability Network’s Creative Harvest event. We had a sensational weekend, talking all things food gardens with 117 people, had some lovely artists working in our space promoting the Arts side of the event and lots of laughing. This platter I served while they worked away under the mulberry tree. Every now and again they got ‘plopped on’ by falling mulberries!

Here we are in between visitors coming  through. After the 40 degree day the day before, it was a bit of a struggle on so we welcomed these little gaps!

I made some mulberry jam for the first time since we took over this place. Other years we have not been able to compete with the birds but the tree has been absolutely loaded so there has been enough to share.  I have also frozen many berries whole to be used as needed throughout the year. This is a great way to be able to throw some food to the little fella without filling him up on sugar. They can be thrown into pancakes, tarts and pies and slowly cooked until they make a lovely natural syrup. A couple of jars of jam is enough for us for the year.

I made a couple of hundred dumplings for my son’s birthday and because pleating so many  would take ages as well as hurting my fingers,  I invested $1.50 in this dumpling press. I also used bought wrappers which fitted the press perfectly and I have to say I was very impressed with the result. Glad about that, didn’t want it to only be used as a play dough tool.

I had a lovely Instagram friend come to collect a grapevine cutting I had started for her and she rewarded me with this lovely little lot.  In front are some Luisa Plums and I am smitten. They change from this colour to deep red as they ripen and the taste is unbelievable. I think one of these will be finding a spot here next season.

The beans and cucumbers went into a salad along with some of my tomatoes, spring onions, with an Asian style dressing, fresh mango on the side and pork rolls in rice paper that I made after I ran out of dumpling wrappers and still had filling. Had to do quality control for the party food of course! 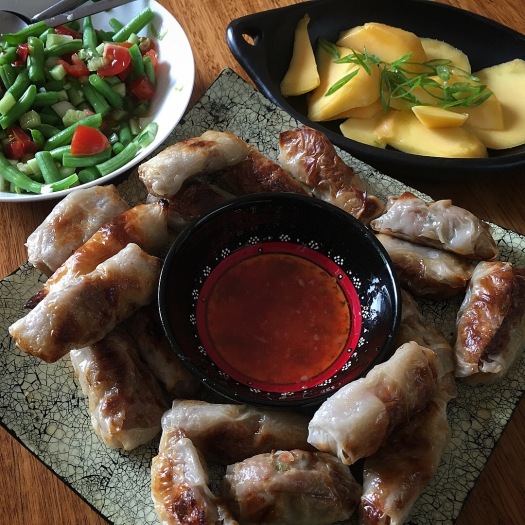 So that’s it for In My Kitchen this month. Thanks Sherry for the opportunity of sharing.

I had decided not to pick any more mulberries this season but then I thought I should make the most of every opportunity, albeit small, as you never know if you’ll be around for the next season. An important reminder by a lovely man who sadly won’t be able to pick mulberries next season.  R.I.P. Shane.