Someone in my Facebook Group (Sourdough Baking Australia & New Zealand) reminded me the other day about Chinese scallion pancakes. I hadn’t made these for such a long time and she had tweaked her recipe to include sourdough discard, so I thought this worth trying. My usual go to source for Asian recipes, is to the fabulous Dumpling Sisters, I was introduced to them by Celia over at Fig Jam and Lime Cordial quite a few years ago and I haven’t bought a dumpling wrapper since! I had some spring onions (scallions) that needed to be picked, so this was a perfect opportunity for them to be put to use. I also had a fairly large amount of starter left over from yesterdays bake so all the more reason to try these pancakes using sourdough starter.

I adjusted the recipe , actually I pretty much threw it out, but this is what the Dumpling Sisters recipe turned into using sourdough starter (100% hydration). This would make enough for an army, so the recipe could be halved with out any problem, I also think rolling the dough out for its first roll using a pasta machine would work well.

Mix everything together until well combined then turn out onto lightly floured board and knead until smooth. This pic is before the kneading! Cover and let rest for at least 20 minutes.

Once rested, break off ‘golf ball’ sized pieces. I rolled the dough into a log first then just cut bits off. 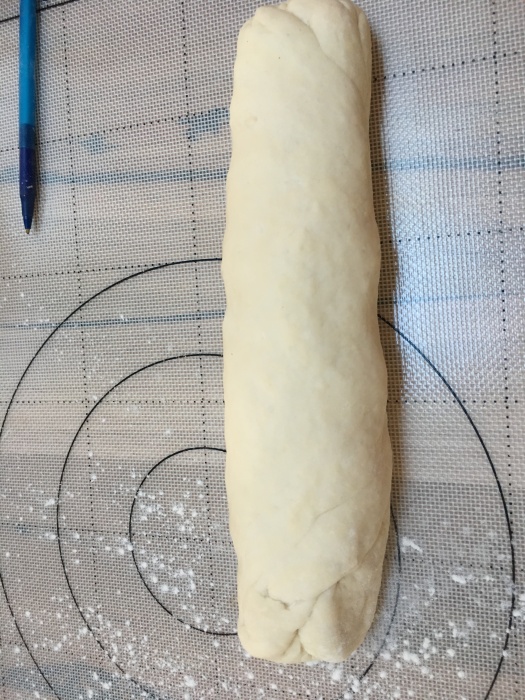 Shape the pieces into balls and roll into a squarish thin piece. 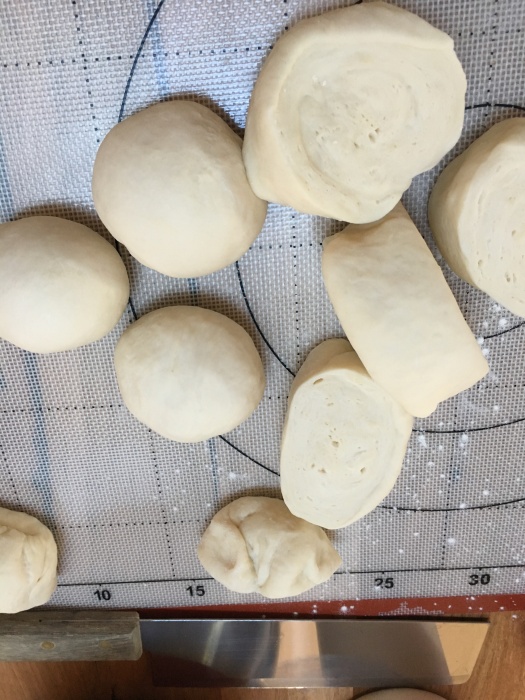 I did a pre roll first which gave the pieces time to relax a bit before I did the big flattening roll out. 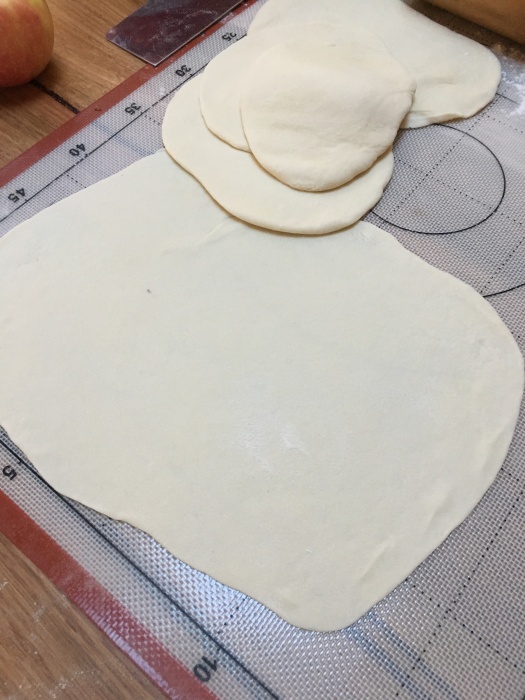 Brush the surface of the dough with oil and sprinkle sparingly with salt and scatter scallions over. I was warned that they may need quite a good dose of salt but I obviously went a bit too far with it! 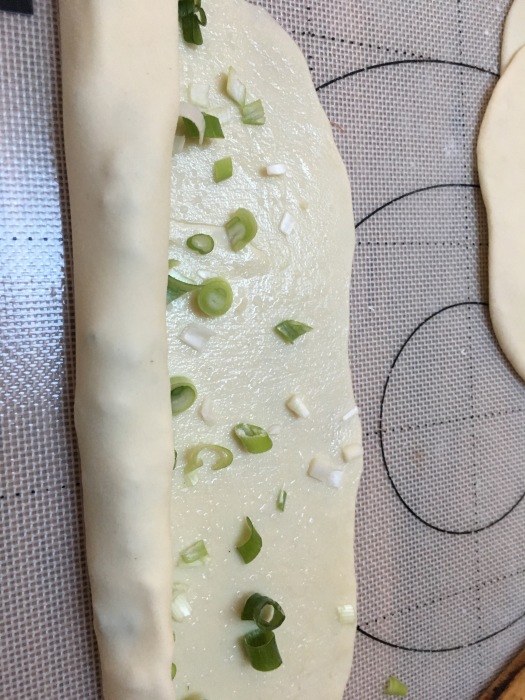 Then depending on which way to final shape you choose (see Dumpling Sisters link), roll the log into a snail. Tuck the tail underneath, let sit to relax the dough for about 10 minutes.

Squash the snail with your hand then roll into a flat disc, the Dumpling Sisters suggest for crispy, roll thinly, for thicker to use as wraps or for a more chewy texture, roll a bit thicker. I wanted thin so they were rolled out to about 3 ml.

Cook the pancakes on a lightly oiled griddle or in a pan, keep heat low so they do cook right though.

Cut into pieces and dip into sauce of your choice, I just went for simple old sweet  chilli sauce.

These were good but I was a bit too heavy-handed with the salt, I actually think they would be nice with sour cream as well as the sweet chilli sauce. We enjoyed ours with a platter of goodies and some bubbles while we put up our Christmas Tree. 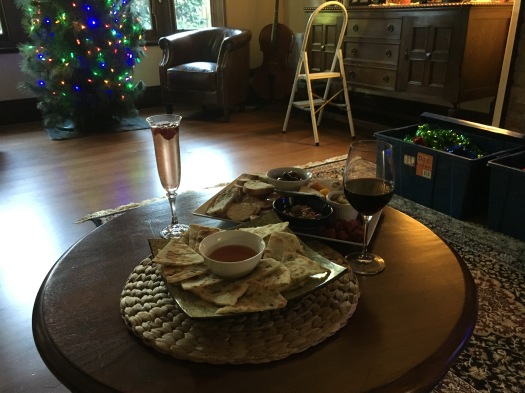 I can’t really remember how they compare to ones made the normal way, but it was a great way to use up some things that would have been wasted otherwise.

I am also really pleased to say that I have a new computer, I had been struggling with my poor old Mac for several months which is part of the reason I haven’t posted much. I couldn’t upload pictures! Well, now I’m back up and running, I might get to actually post one of the several draft posts I’ve got sitting in the dashboard but couldn’t use. 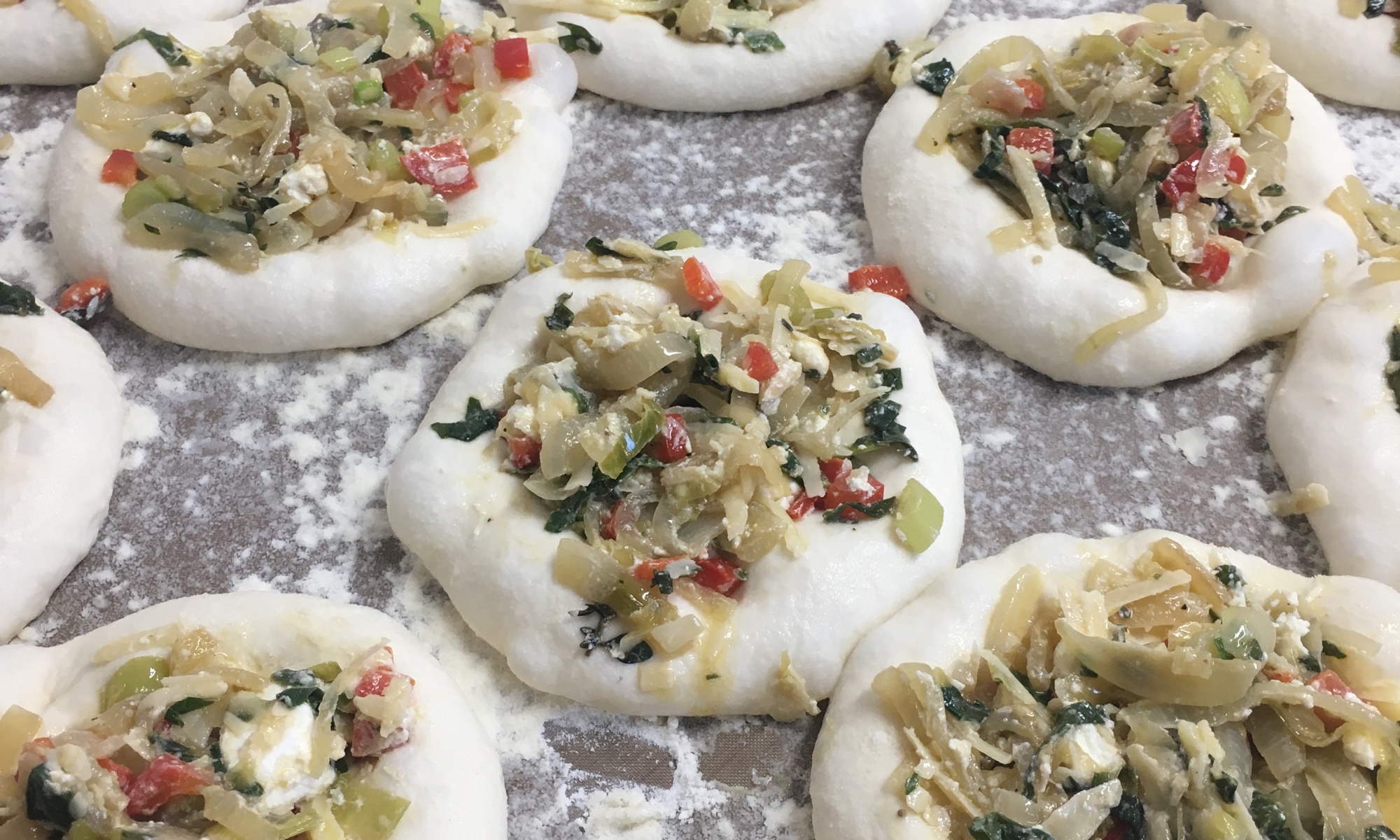 Where oh where do the days go? I just seem to puddle around, not seeming to achieve very much at all, but then I reflect and think about the luxury I now have by being able to do things at my leisure, when I want and to a certain extent on my terms. A big thank you to Sherry at Sherry’s Pickings for linking us In My Kitcheners, I need a kick up the butt to post lately and this linking up helps with that!

I haven’t really got a lot to report about whats been going on in my kitchen, we have been out and about a lot, illness has played its toll on a few and our exteno work has become a priority to finish so we have been going full speed on a few jobs around here.

The most exciting activity In My Kitchen has been that I have now done four sourdough classes which have been very popular and a lot of fun as well as a challenge to do. I don’t get much of an opportunity to interact with people since I left work and this is a great way to do that. It is extremely rewarding seeing how the participants react to their creations and especially rewarding when you see some extremely successful bakes once they get home. Still tweaking the format for the day but it seems pretty good and I have only had positive feedback far.

We love our tea, we decided quite a few years ago to revert to using ‘real’ tea made with tea leaves in a pot. I have never once regretted this decision, it is a nice process putting it all together and taking a moment or two to ponder  while the tea brews. This tea was a gift and it is from our favourite tea shop TeaLeaves in Sassafras. This shop has an amazing range of teas, pots, accessories of all descriptions and is quirky and interesting to visit. 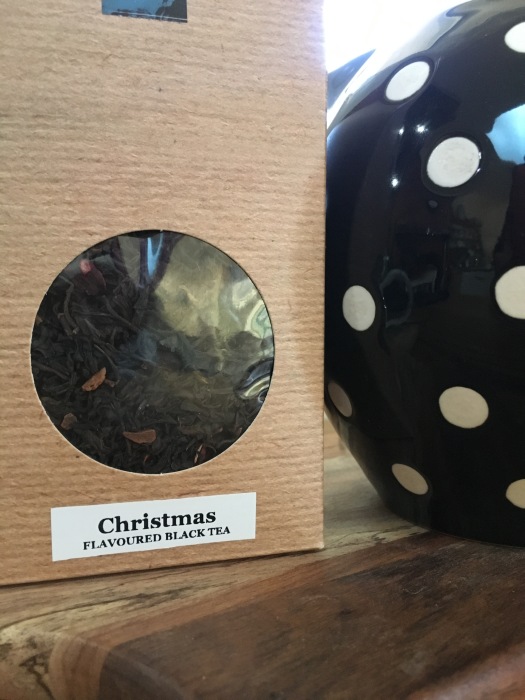 It’s not in my kitchen yet, but come next week it will be. This year’s garlic harvest, somewhat smaller than previous years but hopefully still enough to get us through for close to the next 12 months.

One great thing that is In My Kitchen, is the lovely book by Emilie from The Clever Carrot  I first had the pleasure of ‘meeting’ Emilie quite a few years ago when In My Kitchen was hosted by the lovely Celia at Fig Jam and Lime Cordial Emilie’s book, Artisan Sourdough Made Simple is a great book, easy to read, clear and just gets to the crux of where you need to be. No elaborate hoo ha, no unnecessary race fillers just great information, great recipes, easy on the eye pictures and it is something I would recommend to any sourdough enthusiast. I have not heard one (and I’ve had a lot of feedback) negative about this book. I actually bought the eBook version too. This pic shows the cover and  Emilie’s  low hydration and high hydration loaves which I asked to compare. 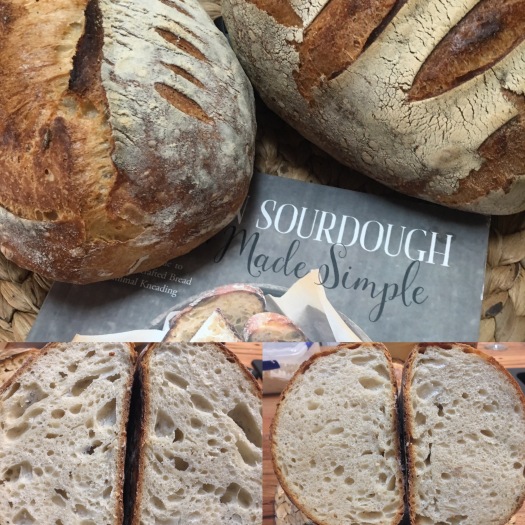 These bialy’s were made following Emilie’s recipe (apart from the filling) to a tee and they were sensational. These are filled with caramelised baby leek and onion, red capsicum, thyme and feta. 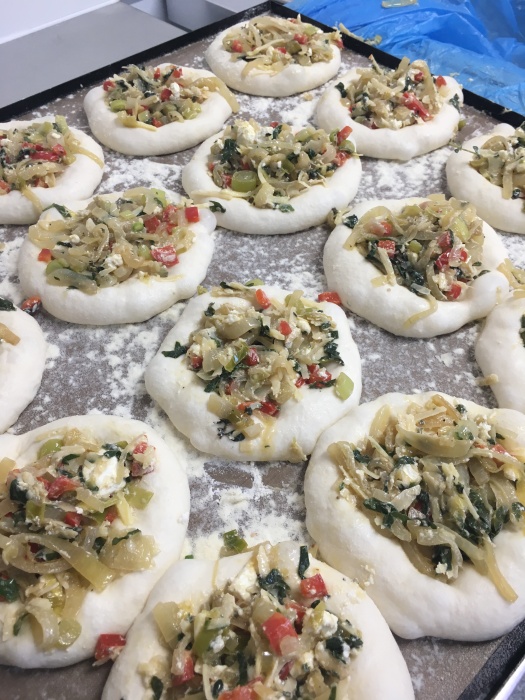 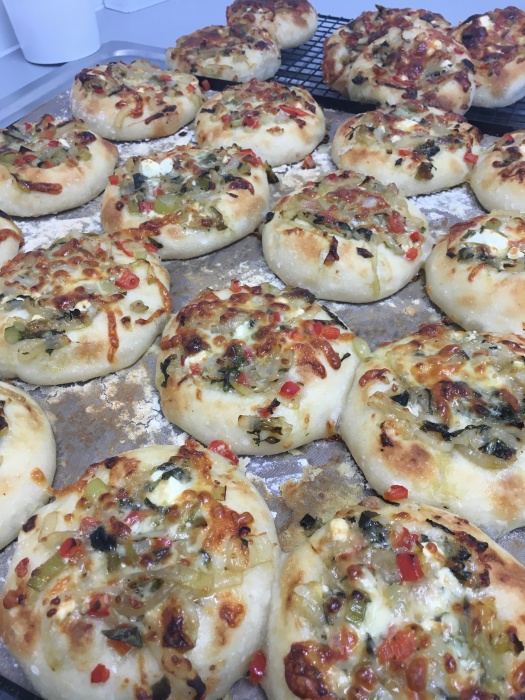 Time to do the Christmas tree again, I laughed when I read Celia had a tree full of years of memories and I mentioned that I had this great idea that every year we would get the kids one special tree ornament and when the time came for them to leave home they would have ornaments to put on their own trees. Well guess what, now we only have lights, the bloody kids have nicked off with all the ornaments!  Anyway, here we are with the snack platter and some liquid refreshment as we sit back and enjoy ‘the lights’.

Finally In My Kitchen is one little fella who loves his food, especially dried fruits, bread and in particular Ree’s Fruit Bread Toast. Here he having a picnic on the floor as it was awful outside. Yep dates are on his top 5 list! Thanks Sherry for taking on IMK this year, wishing everyone a happy Christmas, I look forward to seeing what everyone is up to in the New Year.