I have really struggled posting since we returned from our trip. This has resulted, I think,  from a combination of a few things. It is so flipping cold, wet and miserable here we just haven’t been doing a lot of work, there is an element of frustration that we are so close, yet so far away from completing the target  and I fear I just keep repeating the same old thing. I need a bit of a boost and motivation (or a return to the Mediterranean) I think.

Anyway, whinge over and here is what has been happening over the last few weeks.

I’ve been having fun playing around with a few different concepts in relation to mixing, proving and using different flours. Because it has been so cold it is difficult to find a spot with a fairly consistent temperature to prove my dough. I have previously investigated buying a dedicated proofer but they are ridiculously expensive for what they are and the scrooge in me refuses to fall in to that black hole. Also, with baking for just ourselves, a few family and friends, it doesn’t really matter if the consistency varies a little between each batch and management of time can be adjusted to suit. Anyway, I thought I’d have a go at creating something that if really necessary, I could use. My initial experiment comes in the form of a lizard/reptile heat pad that I bought for $6.00ish (including postage) from eBay.

It has a temperature dial  and is only 5 amps so won’t use much energy. It didn’t come with an Australian plug but a quick fit of one of our travel plugs and we were off and running.

I put the mat, dough and a jug of water (to keep humidity levels up) in under a plastic storage box and monitored the temp over a few hours.

It seemed to work really well, but next time I will put the bannetons on a cake rack as it did show signs of being a bit too warm on the base of the dough. I will probably use a tub that isn’t as high too. Quite happy with the result though for the first test. Temp got up to about 23 over an hour.

The next experiment was using some new Teflon Baking sheets/wraps. As most of you know I’m a bit of an ‘anti-waste’ freak and Tammy from over at Gippsland Unwrapped posted about these sheets a few month ago. Because I’m baking in a cast iron pot and not on a stone, I need to use baking paper every time I bake bread. There is a wide selection of better ethical and environmental choices to make in selecting baking paper but I thought I’d try these sheets.

They certainly moulded to accommodate the pan quite well and they baked in my tiny little oven set to the max without any obvious issues. I haven’t researched issues such as embodied energy or outgassing but I’ll get to that later. The bread baked well but seemed to have more moisture trapped on the base than I would normally get. 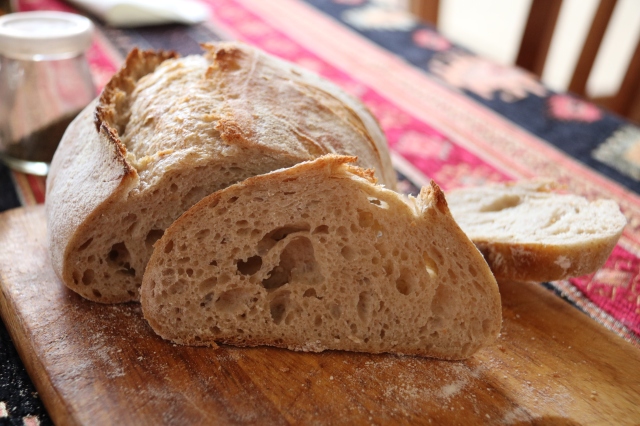 It certainly didn’t create an issue bad enough to stop us enjoying some fresh bread with calamari, a home made tartare style sauce and a fresh salad made with lettuce from the garden, roasted capsicum and red onion drizzled with olive oil and red wine vinegar.

I find store bought tartare sauce awful and home made is usually  loaded with mayo, so I adapted by mixing, greek yogurt (app 3/4 cup, maybe a generous 1/2 cup), a generous tablespoon of mayo, 1tblspn of dijon mustard, 2-3 gherkins finely chopped and about a tablespoon of capers finely chopped. S&P and mix all together, add a squeeze of lemon and it’s done. So much nicer and I would think healthier than store bought. I tend to judge a pub dining room by whether or not they make their own sauces and condiments. It takes only a minute and adds so much flavour to the meal. This lunch was with our daughter and our gorgeous grandson who turned 6 months old last week. It’s great that he is now old enough to sit up at the table in a high chair so he can get used to sharing the ‘family gathering’ food fest that will certainly be a regular event. Look, he already loves the wooden spoon!

I picked these tomatoes and rocoto chilli from the greenhouse yesterday. I think this may very well be the last of the crop although there are flowers on the tomatoes up near the roof. I’m impressed  to have picked these and it’s nearly August. Don’t hold your breath for more to follow for a while. 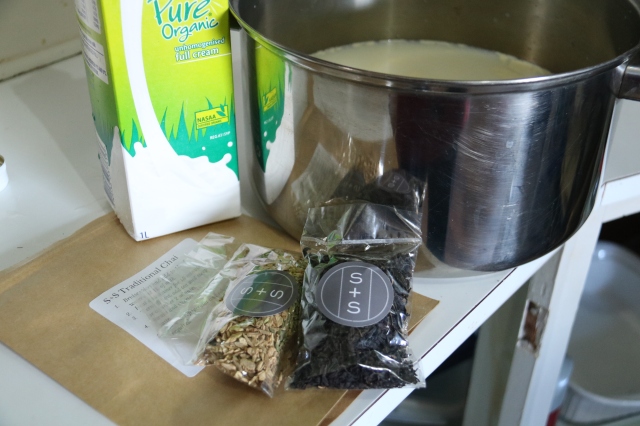 Sunday morning chai. We started a winter tradition of making ginger tea after we returned from India about 3 years ago. It is a beautiful brew where you bring milk, cardamon pods and ginger to the boil  then add black tea allowing it to steep for a few minutes before pouring. We tasted the chai tea String & Salt (my favourite shop in Gippsland) sell at the Warragul Farmers Market and it was really nice, very similar to our Indian brew but with a few extra punches. They sell a pack that makes a 2 litre mix so you can keep having a hit over a few days. I might have to see if I can leave a couple of containers for refills rather than have the little plastic bags each time. They are so accommodating I’m sure we can arrange something.

The last red lentil soup post I did related to the Turkish Bride Soup Recipe I used in the Anatolia cook book.  I didn’t have red lentils for that but it didn’t change much except the colour. Well I’m all stocked up on red lentils again so today I tried a recipe from the book Turkish Fire by Sevkap Yuce. This recipe was so simple (even after my tweaking) and was absolutely delicious. 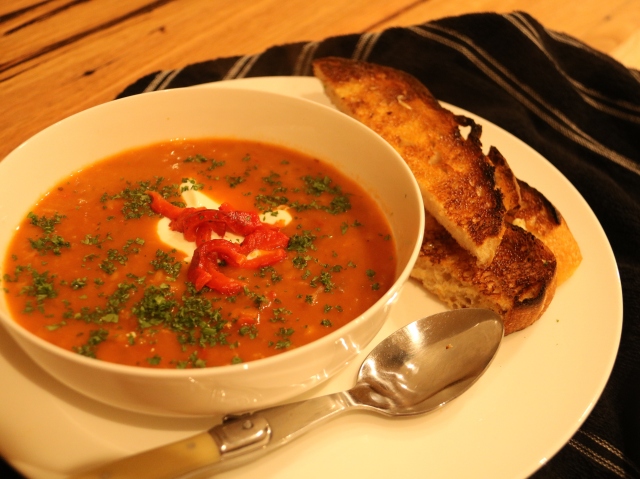 Red Lentil Soup with Milk from Turkish Fire. Original recipe on left, my adaptation in brackets

Sweat onion in oil in pan, add flour and tomato paste cook a few minutes. Add lentils, pul biber or chilli, 2 cups (3 in my case) water, roasted red capsicum and simmer until lentils are tender. I turned the heat off after about 15 minutes and let it sit until serving the next day.  Serve with a dollop of greek yoghurt, chopped parsley or herbs of choice and with crusty bread drizzled with olive oil and rubbed with garlic. I LOVED this soup!

I know, this has been going on and on and on and on for so long even I’m sick of it. The good news is that the bench tops have arrived and they are simply stunning. Can’t really see in this pic but believe me, they are great. They do need another coat of oil sealant but we love them. Cupboards are in (need a few more handles), oven is in place (not connected), floors are done and it is looking great. That vacant wall on rear left is where my 1920’s dresser that I’m restoring is going to go. Jobs left to do are:

This photo taken 12 months ago of the wall where the cooker now sits between 2 windows and the room extended. God, I get the jitters when I think of how much work stripping that chimney has taken. Not to mention all the other jobs as well. 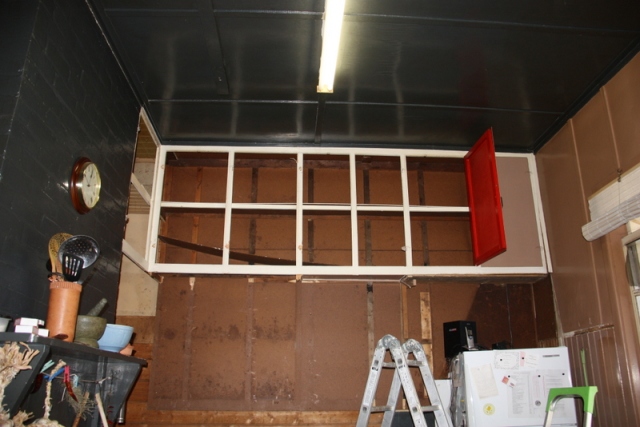 The photo below shows the old back of the house which was removed and the rear of the house extended. That old wall lines up to about 1/2 way along the island bench and where the new second window is. 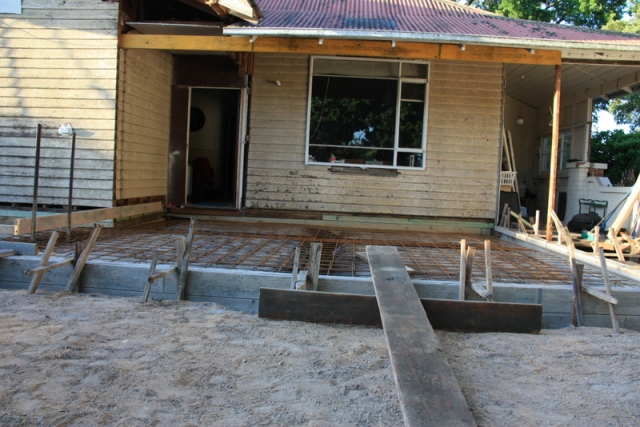 Has it been worth it?