Seems my inner self has been in need of dumplings recently. Is it because the seasons are changing and dumplings are a halfway dish between summer and winter food? Is it because I haven’t travelled for a while and dumplings represent in one form or another every nationality and culture possible. I may be hankering to experience some new ways to have dumplings. Can’t think of any country that doesn’t have a dumpling dish of some sort. Even us Aussies have the great ‘GSD’, Golden Syrup Dumplings, if cooked well are a lovely dessert treat.

My humble attempts this week were pretty PP really. Didn’t make my own wrappers just grabbed a pack from the Supermarket. Having said that, it is a massive step forward that they were actually stocked at the Moe major. Won’t hold my breath for the local supermarket stocking such basics, they seem to be reducing their range of products rather than offering more.

Anyway, Sunday night was pork, ginger and zucchini wonton style dumplings served with a traditional asian dipping sauce. This style of dish is one of my favourites. Easy, reasonably healthy and can be tweaked so you can use whatever is at hand in the filling.

For the filling I used 500g minced pork, 1 grated zucchini (juice squeezed out), 2 crushed cloves garlic, 3 spring onions chopped finely, generous teaspoon of sesame oil, pinch of salt and about a tablespoon of finely grated ginger. All into a bowl and really mix it well. Squeeze it through your fingers and make sure it is really well mixed.

Place a spoonful onto each wrapper, (packet had about 30) then moisten edged and bring sides together to seal. I usually use round wrappers but it was nice for a change to see a different shape.

Popped them into the steamer on the what I now believe to be the perilous gas cooker. 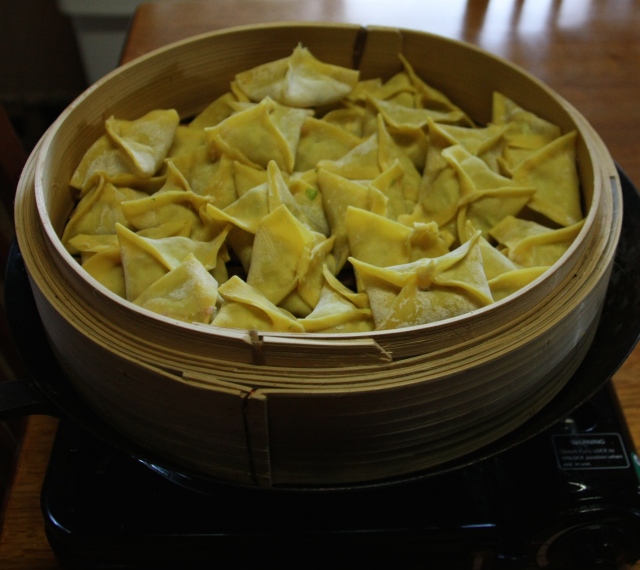 While dumplings were steaming I mixed up the dipping sauce using:

When dumplings seem cooked, (about 10 minutes) place onto platter, scatter with chopped spring onions and drizzle some of the sauce over. I found these wrappers not as nice as usual, bit glassy but they tasted ok. Tended to stick more than I’m used to. Filling and dipping sauce was lovely!

My next dumpling fix was potato gnocchi. Hadn’t made gnocchi for a long time and it is one of those dishes that should never be purchased in packets and only ordered out if you know it is light and fluffy as it should be and not like marbles that are chewy and tough. I microwaved a couple of potatoes (600 ish grams), mashed them lightly and then let to cool. Mix the egg through the mash first to make it smoother and easier to add flour. 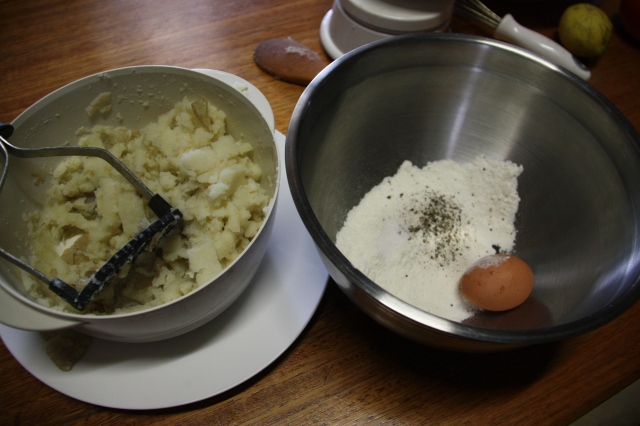 I added about 100g flour, a pinch of pepper and salt and gently mixed it all together. Don’t overwork it, just enough to hold together. Turn out onto a floured board and rolled into play dough type snakes. Have a large pot of boiling salted water ready. Cut bite sized pieces off the snakes, if it is for a more formal occasion you can shape them with little marks but for our casual meal I didn’t bother. Toss the cut gnocchi pieces into the boiling water and when they float they are ready.

I must admit I let the side down with the sauce for this dish. Just some tomato passata, onion, zucchini and eggplant which should have shone but I didn’t do too well with developing the flavour. Nice but lacking oomph! Didn’t take a photo, didn’t think it worthy!

The sourdough starter I got from the lovely Celia at Fig Jam and Lime Cordial has developed beautifully. Phoeny is extremely resilient and has a bit more tang to the taste than my Vessie. I made 2 loaves of basic white at the weekend and they were both tremendous. Thanks Celia!

A batch of tomato sauce and that will probably see the major crop of tomatoes done. Can’t believe it’s still only March and they seem to have stopped. Hopefully a few stragglers will continue, enough to keep us in tomatoes on sourdough breakfasts for a while.