On our recent road trip, as we were leaving Spear Creek Caravan Park in Port Augusta, we purchased some of their grown on the property frozen cryovacced (vaccuum sealed to exclude air) Dorper Lamb which we were told was ‘great’, they say the flesh is naturally seasoned by drought resistant saltbush plants the sheep eat while grazing the property. Not being huge meat eaters we were none the wiser and  thought it might be nice to have a couple of camp oven meals on our journey home. Two frozen parcels, one of lamb shanks and another of a small roast went into the camping fridge, we were looking forward to making a  feast in the camp oven on our journey home.

When camping in Mildura we cooked the lamb shanks in the camp oven and I must admit were very disappointed with the results, consequently I wasn’t in a hurry to try the roast and be even more disappointed.  The now thoroughly thawed joint had been sitting in the fridge since we returned home and I wasn’t sure it was still even fit for consumption as I have no knowledge of how long  cryovaccing can extend the shelf life. On inspection there was no swelling of the packaging, no discolouration of the juices and absolutely no smell when I opened the pack so I thought it was safe to give it a road test. With the weather returning back to winter out came the ever faithful slow cooker again.

In went a  couple of sprigs of rosemary,  10 garlic bulbs, juice of 2 lemons, about a half cup of both white wine and my home made stock. Topped with a sploosh of olive oil with some potatoes ready to throw in after a couple of hours.

This went on slow at about 9.00 in the morning. Added some potatoes at about 12.00 which I took out at about 5.30 and put into my mini oven to brown and crisp up. I also added some cherry tomatoes to the oven to roast while spuds were browning.

Finely sliced some cabbage and threw into the microwave with a dash of stock and some black pepper, Julienned some carrots, cooked them with some honey and mustard and the tiniest dob of butter (because I’m supposed to behave myself), cooked a handful of peas and tried to work out what sauce to use. I put some of the slow cooker juices into a saucepan cranked up the heat and let it reduce, after a few minutes the taste test said it was a little too lemony so I chucked in a couple of cherry tomatoes. Back on the heat for more reduction and it turned out well, still flavourful but the tomatoes added enough sweetness to work.

Might not look neat and tidy but boy did it taste great! The lamb was stunningly beautiful, tender and juicy. It took me back to when little and we had a roast that really tasted wonderful. All the other strange elements actually went together really well. The potatoes had absorbed a beautiful lemony flavour and were wonderfully crisp.

This is my girlfriends plate, says it all!

I’ve given up on waiting for the weather to improve so some of the tomatoes have gone in!   I’m hoping these are black krim variety but due to the fact I’ve had some labelling issues they may very well be roma, san marzano, gross lisse or big beef! 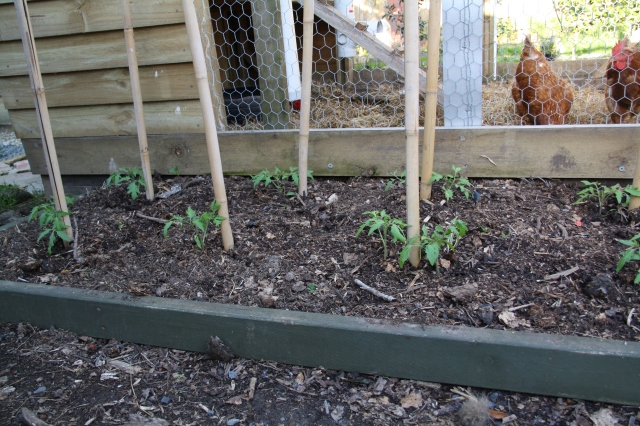 Exciting, 1st sign the beans are on their way through.

Should be a great crop of garlic by the look of this.

I love these little spaces that can be used for planting bits and pieces. I’ve put spring onions and a couple of mini yellow pear tomatoes in this one.

Radishes are booming along!

Hopefully the weather will improve as next week is the Melbourne Cup which is our traditional ‘plant your tomatoes’ day. I’ve still got several to plant, just need to make a bit more room!