All weekend, as I was showing people our shiitake mushroom growing area, I was keen to pick the 2 big fat mushrooms that were well and truly ready, but thought better of it as they do look pretty impressive sitting there growing out of the oak logs. These 2 pics aren’t of the current logs, I forgot to  take a photo of them, but these are of the ones I had at our last house.

The two mushrooms had grown so much we were concerned they may have hit the ‘too far’ point but we went ahead anyway. Tonight’s dinner was going to be potato gnocchi with a shiitake and asparagus Carbonara style sauce. Along with the shiitake I picked some asparagus, a big spring onion,  some parsley, found a couple of eggs, and I bought some light cream and bacon to add to the sauce. While the potatoes were baking in the oven at 180c, I prepared the Carbonara style sauce.

These mushrooms were very big, slicing them was like slicing steak! 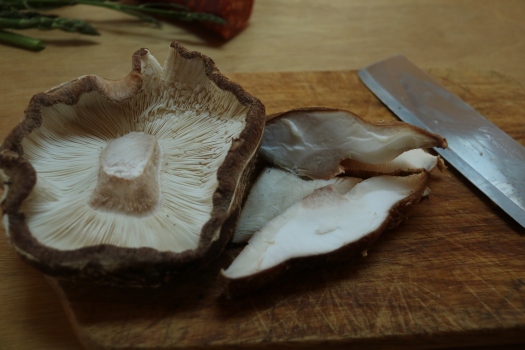 Method
Into a pan drizzle some olive oil and when hot add the bacon and onion, fry until transparent.

Add the minced garlic and sliced mushrooms and allow to cook until softened.

Add the white wine and cook off for a few minutes

Add half the cream and simmer, don’t allow to boil.

In another small bowl mix the egg yolk, rest of cream and the handful of parmesan. Rinse the cream container out with a little water and add to the sauce.

Let sit until just about ready to serve. Make your gnocchi. 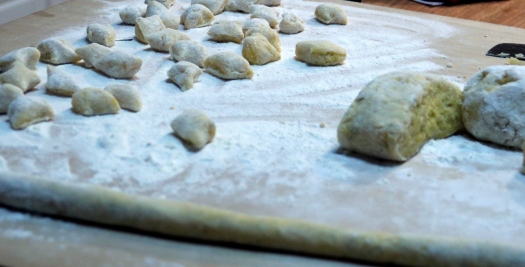 I picked up my paddles when in Melbourne. Place the shaped gnocchi on a tray or cloth that has semolina sprinkled over it until ready to cook. Have a big pot of salted boiling water ready! 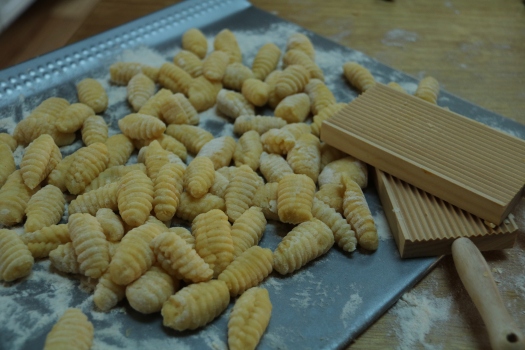 I only cooked half of this mix tonight, I have frozen the ‘ready to cook’ gnocchi for next time I get the urge. For cooking, divide into smaller batches of about half or a quarter and add to the boiling water. When the gnocchi rises to the top of the water it is ready.

Turn the heat back on your sauce, set to low. Add the asparagus and remaining cream, cheese, egg and nutmeg mix, stir through. Very gently heat while gnocchi are cooking. DO NOT BOIL!

As the gnocchi pieces come to the surface of your pot, scoop them out, drain lightly and add to the sauce mix. Repeat until all gnocchi is cooked.

Serve with chopped parsley, I was a little too over zealous tonight (you could stir this through the sauce) and some extra parmesan if desired.

This was undoubtedly the nicest gnocchi and sauce we’ve had in a very long time. The shiitake mushrooms have a delicate flavour but they add such a great meatiness to the dish. By blending both varieties you create both flavour and texture. Very enjoyable!

We have done a huge amount of work out in the back yard this weekend but somehow I am left feeling like we have created more mess than beautification! A couple of major tasks to get the final layout in place were necessary, these have been, getting water points in place for the productive garden and chooks and making sure the storm water run off from the new garage was in place. Setting up the raspberry beds with a protective cage  surrounding them to eliminate those pesky birds nicking all the fruit and to install a small garden shed for storing all the ‘stuff’ necessary when working outside that has up until now been in the old greenhouse. Now these jobs have been done we can get into the serious business of bed layout and fencing the area. Now that’s exciting!

The old greenhouse that I bought from my sister years ago which has been used as a temporary shed since we moved into ‘the new old house’  is being re-invented as a protective cage over the raspberry beds. It will be covered in heavy-duty bird net, cable tied to frame and hopefully will do the trick of keeping out the birdies. I am also considering using this space for my shiitake mushroom production but haven’t quite worked out how to integrate that yet. They will be staying in the old hip bath for a while yet!

I retrieved as many canes I could from what I planted last season but they haven’t had a very great start so I also supplemented the planting with some new ones I bought from a local grower. Hopefully we will have enough to ooh and ahh over once they settle in and begin to thrive.

What’s growing out there?

Very happy to announce that the issues I had been having with powdery mildew on the strawberries in the greenhouse seems to have been resolved. I treated the plants with a garlic spray and have been leaving a window open in the greenhouse to ensure good ventilation is achieved. Looking just about ready to eat!

Coriander I planted from a hydroponic pot purchased at a supermarket is doing well and we’ve harvested it for a few feeds in a couple of weeks.

Oooh, now this is exciting! Couple of asparagus starting to shoot.

and the potatoes are all shooting and getting bigger every day.

This weekend I have picked silver beet, coriander, lemon-grass, assorted asian greens, broccoli and mint, all of which were used in a lovely chicken stir fry for dinner. 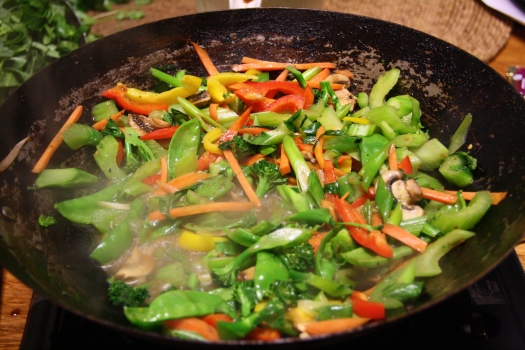 Yep, worth it all! Very nice indeed. What’s growing at your place?

Join 670 other followers
The Urban Nanna