Trifle. Or is it just a cake in a glass bowl?

It all started a few weeks ago when I was clearing out cupboards and posted on Instagram and Facebook a call for ways to use some old crystal bowls I have and am never likely to use for a number of reasons.

That horrible dilemma when you really don’t like something, you can’t imagine ever using them again but they do have sentimental value and aren’t worth anything to sell. Some have been wedding or engagement presents and  have emotional ties.  If I gave them away I would prefer they go to someone I know or who is part of the family. I don’t usually have any issues discarding things I cannot see value in keeping, but these have worked their way into and under my skin. I think it stems from being brought up thinking these things were ‘the good’ stuff only to be used for special times and they demonstrated we weren’t poor when people came to dine.

I had many interesting responses on what to do with them or how to repurpose them, ideas such as creating some garden ornaments similar to these, 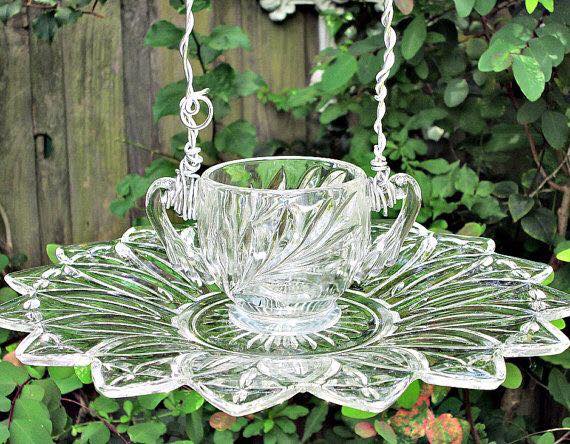 or even as pretty vessels for burning tea light candles in.

There was even a suggestion some could be used as the missile for the annual smashing  of our Christmas gingerbread house (cheers Stuart). That, I wasn’t going to entertain! Glass in the grass is not good when you don’t wear shoes.

Then came the trifle ideas, many voted that the larger bowl was definitely a candidate for trifle to be served in. My niece is a really good cook and sent me a couple of links for some nice sounding recipes, one was a limoncello one that looked pretty good. Celia reminded me she had a recipe on her blog that was easy as well as delicious and Francesca said she had a whole book dedicated to trifle and would like to send it to me. The selection in this book has to been seen to be believed, I will revisit this in the future I think.

I’m not convinced about trifle, childhood memories still make me gag at the thought. I hate custard, not the good stuff like creme pat, but the packet or store-bought goo labelled as custard. I also have memories of soggy peaches stuck into horrible, grainy  cake that tasted like sawdust. I do remember though that I liked the jelly and cream, especially if it was a nice dark jelly like port wine etc. Convinced by my cheer squad that a good trifle is great and I should go for it, I decided that my quest was to create a trifle to share with guests at our Australia Day BBQ. The research began and I must have looked at 100’s of recipes but could not decide on a finalist. I started to see the pattern of ingredients emerge so I winged it, convinced we would end up with yet another soggy, grainy mess.

Basically I was making a black forest cake in glass bowl.

This was my concept,

Pretty simple  really. So this is how I did it, I made a jelly using the juice from the 2 cans of black cherries thickening it with corn flour and throwing in a splash of rum.

I made a simple chocolate mousse but thinned it down slightly so it wasn’t too thick. This was the alternative to custard part of the creation.

Annabelle Langbein’s Ultimate Chocolate Cake was baked  in 2 small round tins rather than one big springform tin.

Cream whipped, what can go wrong?

My cake was cut and ready to start assembling the layers in the bowl  but not unexpectedly, I had not been able to get Kirsch at any of the bottle shops. My next option was Cherry Brandy but no, not available either. I considered making cherry juice but gave that a miss. I took a leap of faith and decided to use some white rum as we had a supply of it in the cupboard. So here we have my Black Forest Rum Chocolate Trifle.

But look at the bowl………………..please ignore the creamy smudge. I know you wouldn’t notice it if I’d used the cut crystal but that’s karma I guess.

After all of that I just couldn’t bring myself to use the crystal. I just don’t like it but I do think it might make a nice bird feeder! This was a winner with all of our guests, people could take a small spoonful portion or dig in and take as much as wanted. The rum was an absolute winner and I think that will be repeated if I make this again. There was no graininess, just boozey, chocolatey, creamy, rich yumminess. Now, a couple of days later the flavour and texture has improved even more. Verdict by Mr ATMT is that it was a cake in a glass bowl, a delicious cake in a glass bowl, but not a trifle. My internal psyche must have overruled I think.

Here are a few of our Australia Day BBQ snaps. Beautiful afternoon, great people and some great food for sharing. As well as my Black Forest Chocolate Trifle I made a Pavlova and peeking in the background is a lammington roll that a friend brought along.

I baked a selection of sourdough breads. From L to R, baguette, baguette, sesame loaf, tomato paste, thyme and feta, baguette, caramelised onion and parmesan loaf (DELICIOUS) and a roast tomato focaccia. I believe the focaccia was great but the vultures devoured it too quickly to sample. 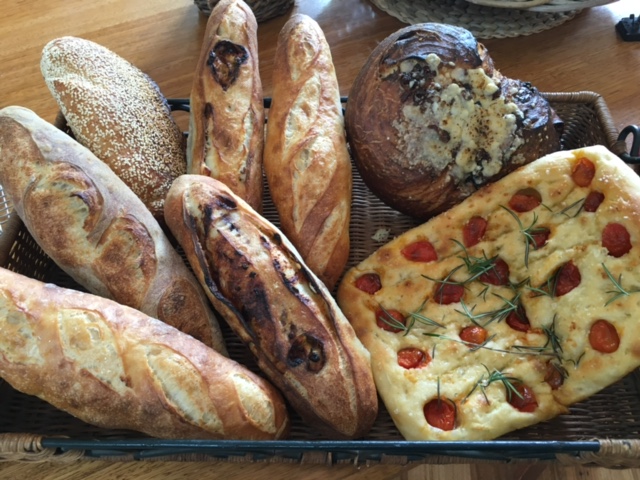 I was going to say we are so lucky to have such a beautiful area to share these events with family and friends, but it is mostly due to some very hard work on our part to create this space.

All worthwhile and we are lucky, very lucky.

15 Responses to Trifle. Or is it just a cake in a glass bowl?