Due to MR ATMT having an allergy to any kind of seafood/fish, I very rarely prepare fish at home because it is a pain having to remember to be meticulous with separating anything that has had contact from the fish for fear of causing a reaction. He’d better not upset me!

I was lucky enough to be given a couple of freshly caught fish and decided I’d treat myself to cooking it  using the asian smoking method. I pretty much followed a recipe I found at Feasting at Home and it worked really well.

First up was to make some 5 spice blend to go in the marinade. That’s nice and easy.

Toast all in a skillet over medium heat until just fragrant, 1-2 mins only. Grind in a coffee grinder until smooth. 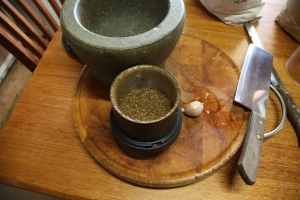 Then to make the marinade:

Put the whole lot into the blender and whizz until all smooth and processed. Place the fish into a container and cover with the marinade. I left mine overnight.

I dragged my Indian karahi out from under a pile of ‘stuff’ on the verandah to make the smoker. Lined the base with 4 sheets of foil, and added:

Stir these together to get an even mix, place a cake cooler over it ensuring there is some clearance between the smoking ingredients and the steamer or whatever you use.

Put the marinated fish into your steamer, (I placed a bit of baking paper under them) put the lid on and place the wok over a fairly high heat until a good amount of smoke appears. Turn the heat down and continue for approx another 5 minutes, turn down again and then another 5 minutes. Fish should be cooked by now. It may have taken a bit longer for mine as I was cooking outside and the breeze was playing with the heat! I then placed it on the grill for the shortest time, just to colour the outside.

I made a little concerned that the smoke flavour may have been a bit on the strong side but it wasn’t. As Goldilocks would say, “It’s just right”.

I picked some lettuce, snow peas and thai basil and chives. Cut up a cucumber and tomato, making a stack piling everything on top of each other. I then placed pieces of the fish on top,  sprinkled with some chopped thai basil and chives  and then added a squeeze of lime juice. Some grilled sourdough that I had spread some feta cheese onto and it made the most beautiful lunch. 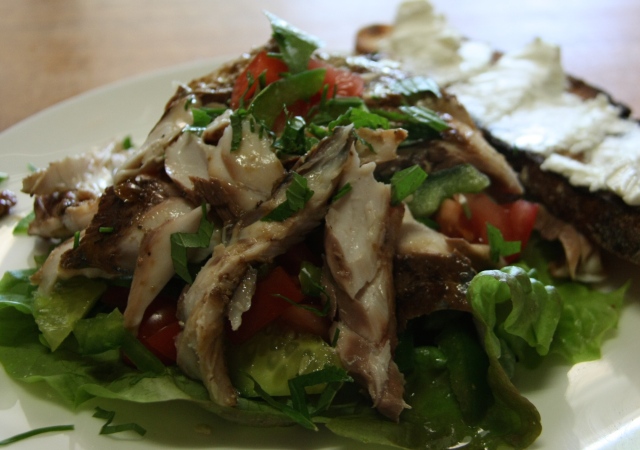 I took spoonfuls of the salad and placed it onto the bread and savoured every mouthful. It was delicious.

Now to VERY carefully clean up my trail of fishy stuff, unless of course Mr ATMT upsets me!